DualPath how it works (and why it looks so good)

DualPath lets you send two video signals in a single channel’s bandwidth. Add a second camera feed from your news truck or helicopter without needing another encoder or microwave transmitter.

The DualPath signal, carrying two videos and associated audio, travels as a single feed over an ordinary path. DualPath multiplexing and demultiplexing operates only at the end points, with no changes required to the existing link. Choose the audio transmission mode to suit the production requirements, and the capacity of the transmission path. DualPath is available with the Multi Image license option for BrightEye NXT models NXT 410-H, NXT 430-X, NXT 445, and NXT 450.

Ensemble’s proprietary image scaling, also used in our award winning Mitto scan converters, ensures the very best image quality. Because we are processing the baseband video signal, we retain all of the inherent elements of pixel quality in native HD SDI formats: bit depth, color space and structural details of the image. No new structure is introduced, such as MPEG macro-blocks. Our scaling makes the simplest, least destructive change to the content. Up sampling to an 8:8:8 representation produces an over-sampled dataset. This technique makes the subsequent filtering more precise and better able to block only the spectral content which would be out-of-band in the compressed image. The result is end-to-end performance with extreme fidelity to the original signal.

The two video signals, and the chosen audio, are synchronized and joined together in the DualPath Tx process. From this point onward, they travel as a single signal. No delay or latency can be introduced which would affect the lip-sync timing of one signal with respect to the other. When they are delivered back as independent video feeds by the DualPath Rx process, they will still be perfectly matched to one another. This is true regardless of the transmission link.

Two video signals are combined into a single raster by compressing each of them to 50% width. 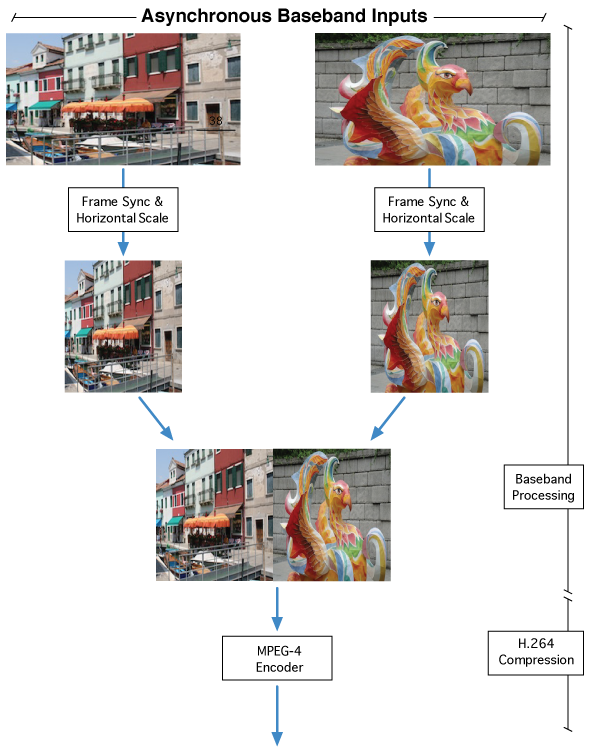 The left and right halves of the DualPath signal are each expanded back to their original dimensions. 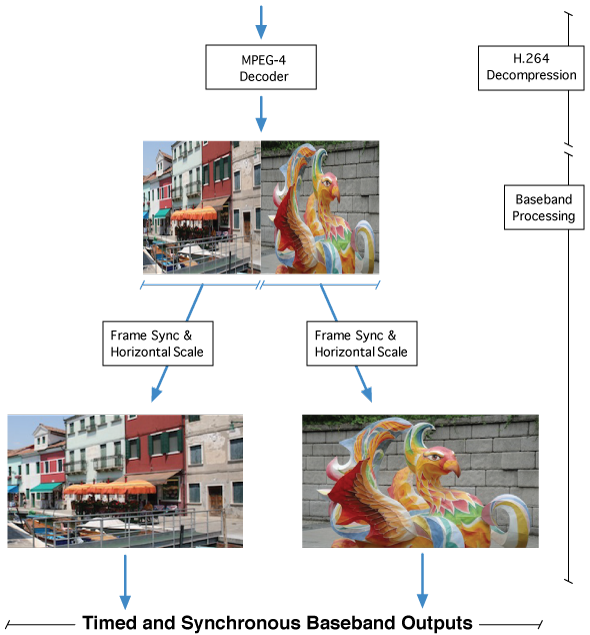 DualPath Plays Well with Others

Integrating DualPath with your existing gear is a breeze. Update your news truck with a DualPath enabled BrightEye NXT 450 for encoding and use your stations existing decoder.

A DualPath system will require one of these NXT products at each end of the system, each with the Multi Image License.

DualPath can be used to combine any of the video signal formats supported by the originating NXT. Further, the format of the DualPath signal can be chosen to suit the nature of the transmission path, and the destination NXT can deliver the recovered outputs according to its format capabilities. Please refer to the specifications of the individual NXT Compact Routers for those details.

Audio can be selected as follows: Input Signal A audio only Input Signal B audio only Combination of A and B audio, separated again at destination Breakaway to other sources in the originating NXT

The number of channels that can be carried from one end to the other will depend upon the capability of the transmission path.