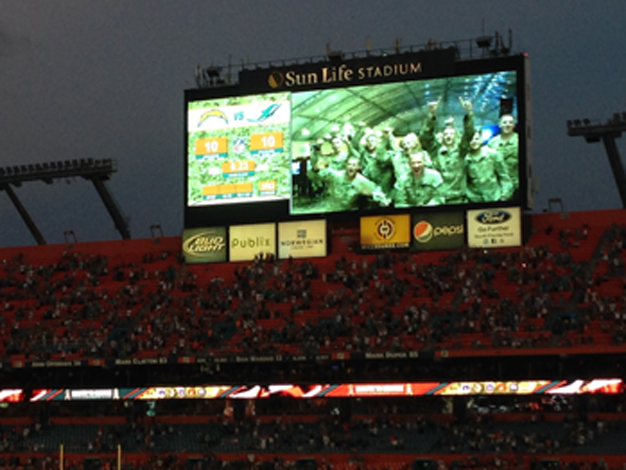 The Miami Dolphins are an NFL professional football team in the Eastern Division of the American Football Conference. They play games at Sun Life Stadium located in Miami Gardens, Florida just north of Miami. During football games, two independent video feeds are required – one is the telecast of the game itself, and the second is the video feeding the large video boards in Sunlife Stadium.

Several times a season, the NFL chooses to highlight a cause to bring to the attention of a national audience. The most visible of these is National Breast Cancer Month in October where players, teams, and even referees wear pink to raise the national consciousness for breast cancer research.

This year, in addition to breast cancer awareness, the NFL chose to highlight the work of US military personnel around the world in a Salute to Service promotion. In support of this effort, the Miami Dolphins decided to display a live broadcast from Kandahar, Afghanistan on the video boards during halftime of one of the games. This broadcast would feature a live salute from the troops overseas along with cheers all around. The trick was to get the video from Afghanistan to the big screen.

After considering several delivery methods, Tomas Ruiz, Manager of Broadcast Operations for the Miami Dolphins, decided to use a Skype session via the Internet to get the video back to the stadium. This would allow a fairly simple set-up in Kandahar, and eliminated the need for satellite links and video crews. A simple webcam was set up to bring the troops into the Skype session, and Skype also allowed a return feed to Afghanistan from Sunlife Stadium. After this link was established on the computers, The video crew needed to get the feed to the big screen.

The videoboards in Sunlife take a 720p feed. They needed to take the computer video from the Skype session and convert it to 720p to feed a Ross Vision 3 switcher that in turn feeds the videoboards. Tomas chose the BrightEye Mitto Pro from Ensemble Designs to do this scan conversion. 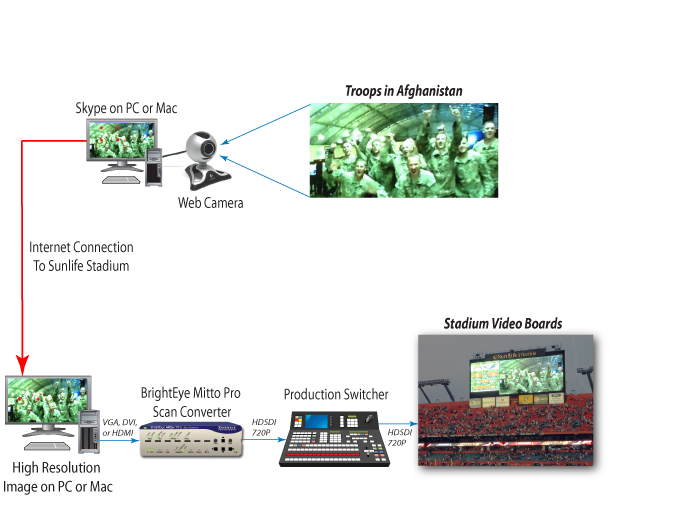 The Mito worked wonders. The computer was connected via DVI to the BrightEye Mitto input, and then connected to the computer monitor via the loop through so they could still interface with the computer. They used the Selection Tool in the BrightEye Mitto to define the area of the computer screen to take to the big screen. The SDI output from the Mitto was configured to be 720p format and was connected to the Vision 3 switcher. An external reference connection made sure everything timed correctly with the house system.

“This set up worked really well,” said Ruiz. “I liked having all the Mitto controls on the front panel of the unit. It allowed us to be able to control the device without having a computer connected to it. It also allows us to rack mount the unit if need be, as all the connections are on the back of the box – not both sides as on some units. The user interface to the BrightEye Mitto Pro was straightforward and very easy to use. We were up and running in a matter of minutes. The video quality from the Brighteye Mitto is outstanding, and having proc amp controls allowed us to tweek the video for maximum quality to the big screen.”

When the time came for the salute, the Skype screen was fed to the videoboards, the troops in Afghanistan gave a smart salute and then the whole stadium erupted in cheers – including the troops. It was a touching tribute to those providing military service across the globe, and the Ensemble Designs Mitto Pro was the perfect solution to deliver it.