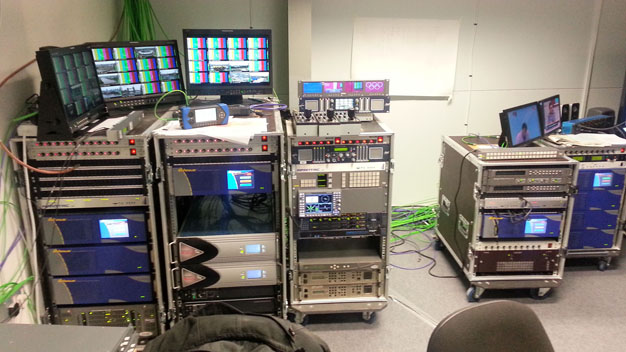 The Olympics is the most widely televised sporting events in the world. The 2012 Summer Games in London attracted an estimated worldwide television audience of 4.8 billion people, nearly 70% of the entire population of the planet.

Television coverage of the Games is coordinated and overseen by the Olympic Broadcasting Services (OBS), an organization created by the International Olympic Committee in 2001. OBS is responsible for designing and building the International Broadcast Center and operating all of the equipment at the various remote Olympic venues. The OBS is also responsible for coordinating the logistics and the activities of the Rights Holding Broadcasters (RHB’s) at the games.

Turkish Radio and Television (TRT), the national public broadcaster in Turkey, was one of scores of broadcasters who provided coverage of the 2012 Summer Games. TRT operates a total of 15 television channels that provide a variety of entertainment, news, sports, and cultural programming to the country’s diverse population of nearly 75 million people. Extensive coverage of the Games was telecast in both SD and HD on three of TRT’s channels.

This Case Study will examine how TRT made use of Ensemble equipment to produce its coverage of the 2012 Summer Games.

The International Broadcast Center – Media Hub for the Summer Games

The 2012 Summer Games featured 26 sports encompassing 39 disciplines, held at 34 separate venues. Television feeds from all of the event venues were produced by the OBS and sent to the International Broadcast Center (IBC), where they were made available to the individual RHB’s.

Each of the RHB’s created its own program stream(s) by adding graphics and commentary to the video and audio from the remote venues. These program streams were then handed off to the OBS for outbound transmission. This short video featuring KING-TV (Seattle) news reporter Allen Schauffler provides a rare glimpse inside the OBS control center.

TRT’s Preparation for the 2012 Games

Due to the high profile nature of the Olympics and the amount of coverage that TRT planned to broadcast, technical planning began many months in advance of the opening of the Games. TRT’s planning involved determining their technical and production needs, developing a system design that would support those needs, and identifying and specifying the equipment required to implement their system design.

High standards for performance and reliability were definite requirements, but cost was also an important factor. Therefore, after developing a detailed list of equipment specifications, TRT issued a request for tender to numerous potential suppliers.

IdeaPro, Ensemble Design’s dealer in Turkey, was ultimately awarded the contract for the terminal equipment specified in the tender request. According to Ihsan Atak of IdeaPro, TRT chose Ensemble’s Avenue series products based on their compliance with TRT’s stringent technical specifications, price, and TRT’s past experience with the Avenue product line. In all, TRT purchased a total of nine Avenue frames and scores of Avenue modules.

The equipment was delivered to TRT in Turkey, where it was checked out and installed in portable equipment racks for shipment to London. IdeaPro personnel assisted TRT engineers during this phase of the project.

When the equipment arrived in London, TRT engineers installed the racks, wiring, and all of the other ancillary equipment in their designated control room and studio space in the IBC. Above is a photo of the TRT control/equipment room at the Games.

The core of TRT’s technical facility was a 128×128 routing switcher. This switcher was used to route incoming and outgoing feeds as well as internal sources, monitors, and signal processing paths. TRT’s on-site production facilities consisted of a 3-camera HD studio.

The Avenue equipment was used to integrate all internal equipment as well as incoming and outgoing feeds with the facility’s core router. In addition to a large number of distribution amplifiers, the system included audio embedders and disembedders, audio D/A converters, and video frame synchronizers.

TRT put the unique capabilities of the 7555 HD/SD Video Processing Frame Synchronizer to good use. They used four 7555 modules, each equipped with the 9615 audio processing option, to synchronize video from remote venues and to add commentary to the ambient sound from the venue that was embedded in the video.

Click here for information on the 7555 module and a block diagram that illustrates how the module – when equipped with the 9615 option – is able to disembed the audio, shuffle the embedded audio channels (if required), mix external audio, and embed the resulting audio on the module’s output.

Control over the powerful processing capabilities of modules like the 7555 is simplified by the remote control capabilities built into every Avenue module. In any Avenue system, large or small, all modules can be controlled via the optional touch screen that may be installed on the front of the Avenue frame or via an external PC equipped with the Avenue PC software control application. In London, TRT used Avenue PC as well as touch screens on four of their nine Avenue frames.

The 2012 Summer Games was a high profile international event that received extensive coverage by scores of broadcasters across the globe. One of those broadcasters, Turkish Radio and Television, selected Ensemble Designs as their supplier of signal processing and distribution equipment. Their choice was based on technical specifications, price, and their past experience with Ensemble equipment. They put the unique capabilities of the Ensemble products to good use, which contributed to their successful coverage of the Games.