Early Investment in Digital Infrastructure Pays Off for KEYE-TV

On April 3, 1997, the Federal Communications Commission (FCC) announced a plan for the conversion of all U.S. high power television stations from analog NTSC to digital ATSC transmission. The FCC awarded each existing analog TV licensee a second channel to deliver digital television signals. Stations were required to put a digital channel on the air no later than mid-2006 or run the risk of losing both their digital and analog licenses.

The cost of putting a new digital transmitter on the air averaged several million dollars per station – a significant investment for the larger market stations, and a burdensome one for smaller market stations. Plus, in addition to the capital equipment costs associated with their new digital transmission facilities, stations were required to keep their analog channels on the air until 2009.

Many stations elected to do the minimum required by the FCC: to put a digital transmitter on the air. In an effort to avoid additional capital equipment costs, they converted their existing standard definition analog signal to digital and simulcast their programming on both their analog and digital channels.

Some stations made the decision to upgrade their station’s infrastructure to digital as well as putting a digital transmitter on the air. In doing so, these stations laid the groundwork to take full advantage of some of the added capabilities of the new digital transmission system.

This case study examines the digital upgrade path taken by KEYE-TV in Austin, Texas, and the advantages that they have enjoyed as a result of their early decision to “go digital.”

KEYE began operation as a locally owned independent station in 1983 and became a CBS affiliate in 1995. The station was owned by CBS from 2000 until 2007, when it was purchased by its current owner, Four Points Media Group, which owns stations in three other markets.

Austin ranks 44th among Nielsen Research’s 210 Designated Market Areas (DMA’s). A total of seven television stations vie for their share of the 700,000+ television households in this highly competitive “top 50” market. 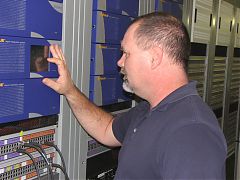 KEYE’s current Engineering Technical Manager, Prentis “P.L.” Laird, was hired by the station in 2004. His first assignment was to develop a plan for converting the station’s ageing analog infrastructure to digital. His prior experience military communications systems and in designing digital satellite trucks would prove invaluable in his new role.

His approach was to engineer the system “from the inside out.” Step 1 would be to replace the station’s analog router with a 1.5Gbit/s digital router. Step 2 would be to integrate legacy analog equipment and newly acquired digital equipment with the new digital router.

Laird worked closely with systems integrator Chuck Walior (formerly with Digital Images, currently with Aldis Systems) to identify a suitable supplier for the signal interfacing and processing equipment. Laird’s primary criteria for selection of this critical equipment were:

Based on prior experience with equipment from a variety of different manufacturers, Walior recommended Ensemble Designs.

KEYE placed an initial order for 18 Avenue frames and an assortment of modules in the summer of 2004. Today, they have a total of 45 frames containing a total of approximately 350 modules.

The Avenue frame has been designed to support all commonly used signal formats from analog audio to 3Gb/s digital video. The frame’s universal backplane means that any Avenue module will work in any frame slot, regardless of function. So when a new module is added to a frame, there is no need to install a special backplane. And when a module that is no longer needed is replaced with a different type of module, there is no need to change the backplane.

The Avenue control system is equally adaptable. All frames have an Ethernet connection, and all modules may be controlled over the network. Whenever a new module is added to the system or an existing module is replaced with a different type of module, its presence is detected and control is automatically enabled.

Capitalizing On Their Investment

By 2005, KEYE put their digital transmitter on air and they had key elements of a digital infrastructure in place. Even though they would continue their analog service for another 4 years, they were positioned to begin building an audience for their new digital channel.

KEYE and CBS recognized that the most significant advantage of DTV is its HD capability. By the end of 2005, despite relatively high prices, more than 21 million HD TV sets had been sold in the US. With prices trending downward, that number was projected to grow rapidly.

In 2005, CBS was already delivering all of their primetime programs to their affiliates in HD. An increasing number of CBS sports programs were being produced and delivered in HD. In the fall of 2005, CBS began airing The Late Show with David Letterman in HD. In addition, daytime programs – both network and syndicated – were beginning to be produced in HD.

For cost reasons, some stations chose to replicate their standard definition analog programming on their digital channel. Because of the early investment that KEYE made in HD-capable digital infrastructure, KEYE-DT viewers were able to enjoy their favorite network and syndicated programs in full HD.

In November of 2007, KEYE became the first station in the Austin market and the first station in the Four Points Media Group to begin producing and airing its local newscasts in HD. News is a ratings builder for local TV stations, and KEYE’s early entry into HD news significantly enhanced its position in the Austin market. The station’s migration to HD news was facilitated to a large extent by the HD-capable digital infrastructure that it had put in place.

In October of 2009, in an effort to capitalize on the large number of Hispanic and Latino homes in their market, KEYE began carrying programming from the Telemundo network on its “.2” digital channel. They also produce a Spanish language newscast that airs weeknights at 5 and 10pm. The flexibility of the station’s infrastructure simplified the task of activating their second channel.

Broadcasters are constantly looking for ways to improve operational efficiency. Competition from alternative delivery systems like cable, satellite, and the internet has slowed or reduced revenue intake, which in turn has put pressure on operating expenses. In short, terrestrial TV stations have been forced to find ways to remain competitive while controlling costs.

KEYE has used technology to keep its operating costs under control. The station’s on air and ingest operations are fully automated. Master control is manned during the day, but it operates unattended during the overnight hours. Signal integrity is monitored on a continuous basis by Avenue model 7455 protection switches. These have been programmed to look at all critical elements of the signals feeding the station’s transmitter, including video, audio, and metadata.

In the event of a signal failure or anomaly, the 7455 will change over to a standby source, and report the changeover to the Avenue PC control system. Avenue PC will then send a pager message to the master control supervisor, who will investigate the cause of the changeover and take remedial action. Avenue PC can also be programmed to send an email notification of the event to one or more people. This system has enabled the station to virtually eliminate downtime while keeping costs under control.

The FCC’s 1997 mandate that all US terrestrial television stations to convert from analog NTSC to digital ATSC transmission made it necessary for all stations to invest millions of dollars in new digital transmission equipment. In order to avoid additional capital investment, some stations elected to continue to use their existing standard definition analog facilities rather than bear the cost of upgrading to an HD-capable digital infrastructure. In doing so, they limited their ability to fully leverage the capabilities of their new DTV channel.

Stations like KEYE that chose to make an early investment in digital infrastructure were able to move rapidly to improve their competitive position by providing enhanced and expanded programming to their viewers.