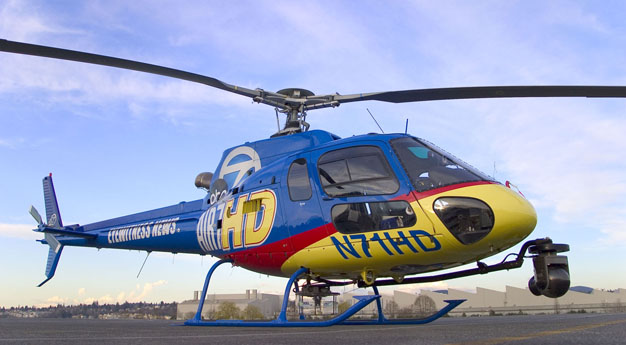 Electronic News Gathering (ENG) originated in the late 1970’s, when portable video cameras replaced film cameras as the primary image acquisition tool. At first, stories were recorded in the field and the tape was taken to the station where it was edited and broadcast. Today, portable microwave and satellite links are used to air stories live.

Intense competition in television news has prompted many stations to augment their fleet of ENG trucks with one or more helicopters. The unique perspective that live airborne ENG provides can be a significant ratings booster.

Designing and building an ENG helicopter is a daunting task. A fully outfitted television news helicopter has multiple cameras, record/playback capability, switching, monitoring, an off-air receiver, and a microwave link. In a very real sense, it is a complete airborne television studio, including STL. The design task is complicated by the fact that available space is limited, heat and vibration is extreme, and all equipment must be integrated physically and electrically in accordance with FAA regulations.

This Case Study will examine how Geneva Aviation (www.genevaaviation.com), one of the world’s leading builders of airborne ENG systems, has used Ensemble Designs BrightEye modules to provide its customers with the functionality and reliability they demand. 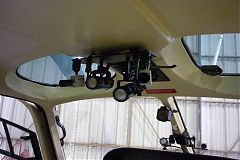 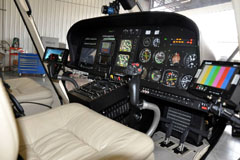 When television stations first began using helicopters as news gathering tools, their approach was simple and straightforward: use the aircraft as a platform to carry a videographer and his equipment aloft. This gave the news producer a dramatic new perspective from which to cover certain types of stories: fires, natural disasters, police pursuits, and more commonplace events like traffic jams.

This simple approach had a number of significant shortcomings. First, it was nearly impossible to produce stable, shake-free pictures using a handheld camera, especially when the camera’s lens is zoomed in tight. Attaching the camera to a fixed mount was not a viable option due to the vibration of the helicopter itself. Second, the camera’s fixed position inside the cockpit limited the range of shots available. Third, since the pilot was not able to see what the videographer was able to see through his viewfinder, the pilot and the videographer had to function seamlessly as a team. Finally, since the crew was not able to see what was actually being aired, they could not be certain that the camera in his aircraft was “live.”

Airborne ENG systems have evolved over the years to systematically address those shortcomings.

The limitations imposed by a handheld camera were addressed by the use of a gyroscopically-stabilized camera mounted on the outside of the aircraft and controlled remotely from inside the cockpit. Typically, small cameras mounted inside the cockpit and cabin provide fixed shots of the pilot/reporter, talent, and also allow for on-air in-flight interviews. A tail-mounted camera may also be used to provide a fixed shot of the aircraft in flight with the surrounding scenery in the background. Images from the tail camera are used extensively for weather reports. A video switcher allows the camera operator to put any of the auxiliary cameras on air when he has to reposition the main gyro-stabilized camera.

An off-air receiver enables the crew to know when their feed is on the air. The system also typically includes a VTR to allow the output of the system to be recorded continuously, even when the bird is not on the air live. Compact, lightweight LCD monitors enable both the camera operator and the pilot to view all video sources. 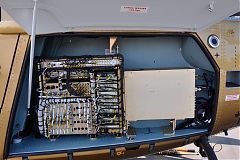 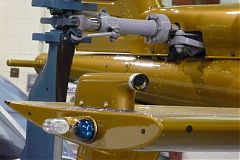 Unlike the spacious, controlled environment of a typical fixed facility, the conditions inside a helicopter are cramped and not terribly equipment-friendly:

An equipment room in a typical facility measures thousands of cubic feet; the available space in the “equipment room” (the cargo hold) of a typical helicopter is under 20 cubic feet.
The temperature in most equipment rooms is maintained at 24 degrees Celsius (75 degrees Fahrenheit) or less; the temperature inside the cargo hold of a helicopter can routinely varies between minus 20 to plus 50 degrees Celsius (minus 4 to plus 122 degrees Fahrenheit).
Equipment in a fixed facility is seldom subjected to vibration; in a helicopter, it is subjected to constant, sometimes intense vibration. Someone once said, “A helicopter does not want to fly, it just vibrates so much that the ground rejects it.”
The primary power source in a typical facility is a stable, continuous 120/240VAC; the primary power source in a helicopter is 28VDC that is interrupted whenever the helicopter’s engine is not running.

In selecting equipment for use in their projects, Geneva Aviation’s CTO, Steve Cudnofskey, looks carefully at size, weight, power requirements, and environmental robustness, as well as the devices features and performance, in order to meet the customers objectives, After extensive research and testing, Cudnofskey has chosen Ensemble Designs’ BrightEye series of signal processing and conversion modules for all their current ENG designs. 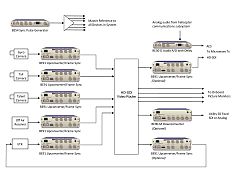 Designing and Building an ENG Helicopter

In addition to cameras, monitoring, VTR, off-air receiver, switcher, and microwave link, a significant amount of signal conversion and processing equipment is required to properly outfit an ENG helicopter. Key functions that are required are similar to those required for fixed and ground-based mobile systems:

The simplified functional block diagram illustrates how various BrightEye modules might be used in one of Geneva Aviation’s typical airborne ENG systems.

At the heart of the system is a BE54 Master Sync Generator module. The BE54 has color black and tri-level sync outputs that can be used as a master timing reference for all equipment in the system. In addition, an SDI test signal output provides color bars, crosshatch, and a variety of other signals. All signals are derived from a high-stability temperature compensated crystal oscillator (TCXO).

BE91 HD upconverter modules are used to convert all sources, regardless of format, to HD-SDI. While the gyroscopically stabilized main camera is typically an HD unit, the cockpit and tail cameras are internally referenced standard definition units with composite analog or SDI SD outputs. The BE91’s built-in frame synchronizer is used to lock the upconverted HD signal to the master reference provided by the BE54.

Fine adjustment of source timing is accomplished using the BE91’s USB port and a software control application running on an external PC or Mac. Zero timing all sources into the router ensures clean, glitch-free switching.

The block diagram shows two additional BE91’s on the output of the router: one on the router destination that feeds the microwave, and the other on the router destination that feeds the input to the VTR. These are optional and are typically used in installations where spare router inputs are used for portable equipment that may be used from time to time. These additional BE91’s ensure that these two router outputs are always HD-SDI, locked to a stable reference, regardless of the format or the quality of the video coming from the portable source.

The audio that accompanies the microwave feed – typically, commentary from the pilot/reporter – is derived from the aircraft’s communications system. A BE30-D A/D converter is used to convert the helicopter’s analog audio to digital. The BE30-D has a built-in delay that can be adjusted using the BrightEye control software to compensate for the video delay introduced in the upconversion of the onboard talent camera to HD. This ensures proper lip sync when the talent camera is on air. Ensemble developed the “D” (adjustable delay) version of the BE30 in response to a request from Geneva Aviation.

The block diagram shows how an optional BE92-M Downconverter module can be used to convert an HD video router output to SD to feed any device that requires a standard definition signal. The BE92-M has both SDI and analog composite outputs.

Airborne ENG platforms play a key role in today’s highly competitive local news environment. Multiple formats of cameras, onboard record and playback, switching, and extensive monitoring capabilities are common requirements in news helicopters. Successful system design depends on the availability of a wide variety of rugged, compact, and highly versatile building blocks. Without the availability of Ensemble Designs BrightEye modules, the proper design and construction of reliable multiple format ENG Helicopters would not be possible.